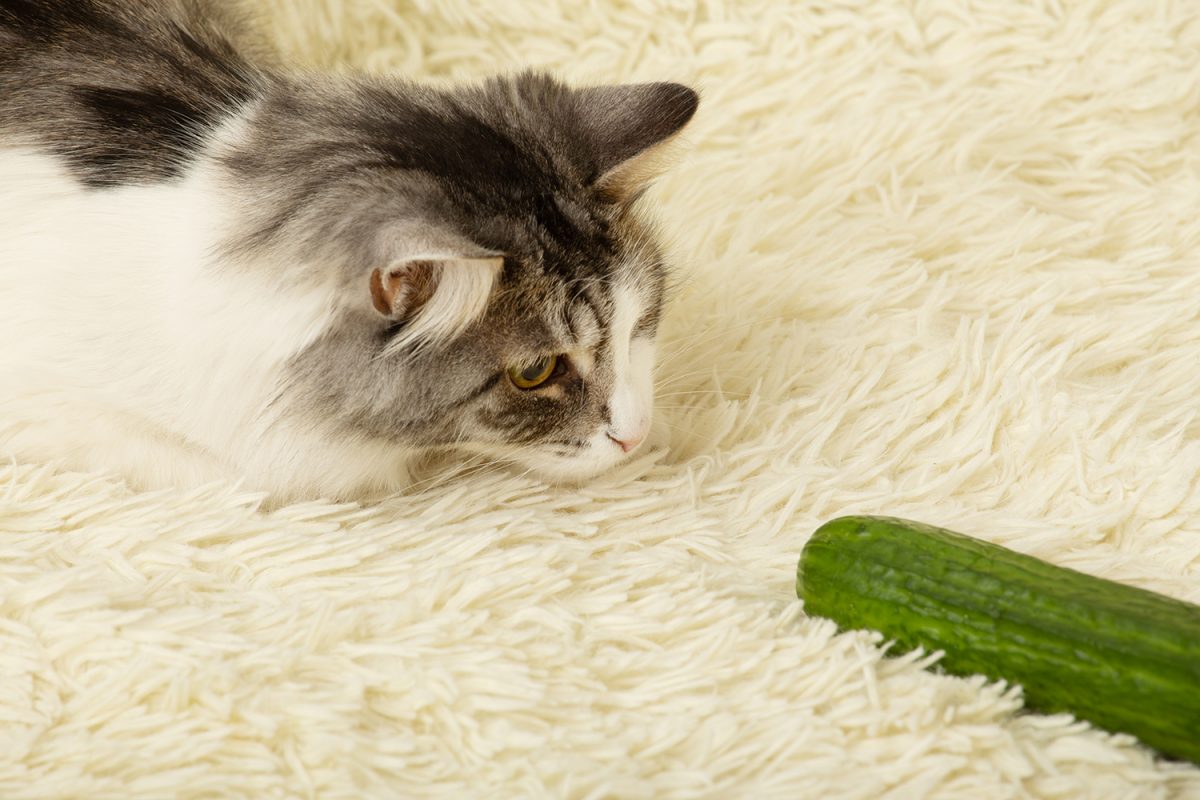 Why are cats scared of cucumbers and other curiousities

Recently a set of quirky videos started to go viral. These short films showed kitties getting the surprise of their life when coming across an unexpected cucumber, placed behind them by their naughty owner. In most videos, cats jump vertically into the air and run away from the offending cucumber. But why do cats have this reaction? And what other cat curiosities care popular on the internet? Cat in a Flat looks into it…

Why cats are scared of cucumbers

It is a curious sight to see a feline fling itself into the air at the sight of a salad ingredient. What is it about cucumbers that turns our ferocious felines into scaredy cats?

Con Slobodchikoff, animal behaviour expert and author of Chasing Doctor Dolittle: Learning the Language of Animals, explained to ABC News that he believes it is because cucumbers resemble snakes.

“Cats are genetically hard-wired through instinct to avoid snakes,” he said. “Cucumbers look enough like a snake to have the cat’s instinctive fear of snakes kick in.” Jumping up is a common cat reaction to seeing something low and potentially threatening on the ground. It’s a built-in instinct that helps cats avoid snake bites and potentially deadly threats. It’s true that house cats, or kitties in cooler climates, are unlikely to ever come across a deadly serpent. But the behaviour remains intrinsic nevertheless.

Being predators, cats have eyes at the front of their head rather than at the sides. A cat’s field of vision, therefore, focuses forward instead of observing the world around them. Placing an unexpected object outside of their field of vision means our furry friends are startled when confronted with an unexpected sight. Animal behaviourist Jill Goldman told National Geographic, when a cat’s response instinct is triggered “a cat will often try to get out of there as quickly as possible and then reassess from a distance”. So that’s why a surprise cucumber will lead to a kitty jumping or scurrying away as quickly as possible. And it’s not just cucumbers that surprise kitties, the same results occur with apples, bananas and many other objects.

Why you shouldn’t scare your cat with a cucumber

The reaction videos of cats jumping at the sight of cucumbers might seem nothing but harmless fun. However, as behaviourist Jill Goldman notes, scaring your cat can have negative long-term consequences. The shock could cause your kitty to jump without looking into something that could inflict an injury. The rush of fear and adrenaline can also be bad for Mr Whisker’s health; putting strain on his heart and inflicting unnecessary psychological trauma. Your cat could become scared of cucumbers, the area the fright happened, or worst of all, of the person who inflicted the panic – you.

Another cat curiosity: cats and circles

Another cat phenomenon that that internet embraced was kitties’ tendency to sit in a circle on the floor. Just the outline of a shape in tape, chalk or paint seems enough to keep cats contentedly contained for minutes or hours at a time. It seems that the reason cats enjoy these outlines might be similar to why they love boxes – it makes them feel safe. The smaller the area, the most in control a cat perceives itself to be.

Recently this fascinating behaviour reached the news in a very 2020 way. Cats in Quezon City, The Philippines, adopted and sat in circles drawn on the pavement to encourage humans to socially distance while queuing. A local shopper snapper the stray cats each claiming a circle for themselves and the pictures went viral.

Our furry friends’ love of boxes is well documented and adored by humans. Cats in boxes, especially boxes that are slightly too small, is perhaps one of the internet’s favourite kitty topics. Read about why cats love boxes – and how it made one cat famous – in this Cat in a Flat blog.

The mysterious allure of catnip to our furry friends is something many memes and YouTube videos has explored. Rolling around, licking, purring: a cat’s reaction to catnip can be a source of intrigue and amusement. Find out more about why cats react to catnip in this way in this Cat in a Flat blog.

One of the funniest recent challenges to appear on TikTok and YouTube also involves confusing cats. In the “slurp challenge” cheeky cat owners wait for their kitty to start grooming. As soon as Mr Whiskers takes a big lick to clean their fur, the owner makes a noisy slurping noise at the same time. Cue their cat looking up, bewildered, as if to say, “did I make that noise?” As kitty gets back to grooming, the owner slurps again, causing more confusion and disgruntlement and, eventually, an accusing stare as the cat realises from where the noise is emanating. Like the cat and cucumber videos, the humour comes from the concentration of such a regal animal being interrupted by something silly. No creature can look haughtily offended as effectively as a cat.

There will always be a new way to make people laugh with cat videos, and we can’t wait to find out about the new trend!

Has cats’ reaction to cucumbers sparked an interest in kitty behaviour? Find out more about cat behaviour on the Cat in a Flat blog including why kitties purr, what they hate water, sleep so much, and why our furry friends chatter at birds.

Cat in a Flat offers pet sitting near you for home visits and overnight stays.

Find a Sitter Become a Sitter

Answers to Your Top 7 Questions About Cat Behaviour

Why Does My Cat Lie On Its Back? Reasons Why Your Kitty Sleeps Topsy-Turvy

Protest Pissing: Why Your Cat Is Peeing Outside the Litter Box

Fill in your details to join the community and book this cat sitter, or log-in .