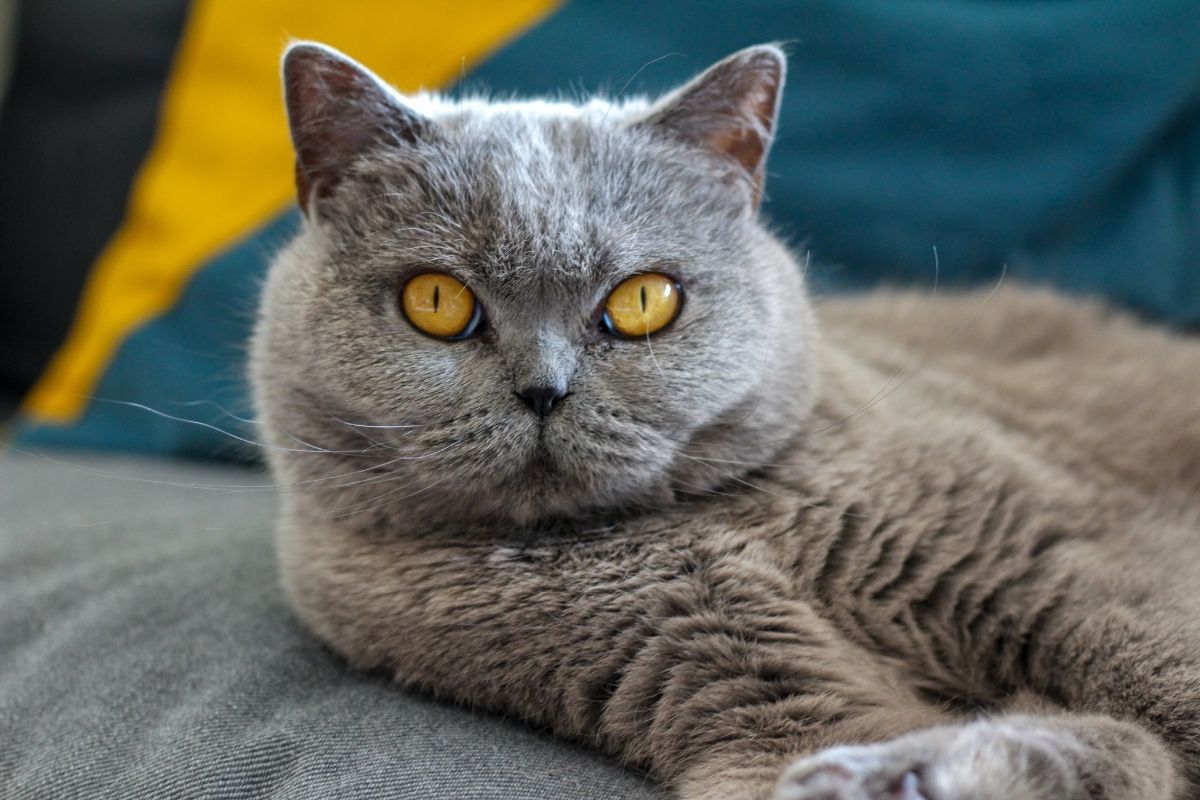 Who Is the British Shorthair? Things To Know About This Popular Cat Breed

If you’re considering bringing a new kitty into your life, the British Shorthair cat should definitely be on your list of canidates. Not only are these felines adorable, but their happy-go-lucky catitudes can make them the purrfect addition to your family too. Are you thinking of getting a British Shorthair cat but aren’t sure if this is the right breed for you? Below, Cat in a Flat tells you everything you need to know about this popular cat breed!

What is a British Shorthair?

British Shorthair cats are a medium to large-sized kitty. They can weigh up to 7kg and are stocky and big boned. British Shorthairs come in solid colours—but the most common type is those with blue coats and striking orange eyes.

Their lifespan can vary depending on whether they are indoor or outdoor felines. If properly protected against cat hazards in and out of the home, a British Shorthair can live an average of 12-17 years.

Where do British Shorthair cats come from?

The British Shorthair is one of the most ancient feline breeds in the world. A fascinating cat fact about them is that, despite the name, British Shorthairs can trace their origins back to first century Rome. When Roman invaders made their way to the British Isles, they brought British Shorthair cats with them to serve as working felines. Much like their human counterparts, these kitties were tough and hardy—more than capable of surviving a tough sea journey and serving as working cats abroad.

Once in Britain, these wonderful furry friends became popular for their round faces and affectionate natures. They were first recorded as the British Shorthair in 1870 and have been one of the most popular cat breeds in the UK ever since!

Pros of a British Shorthair cat

Independent. They are loyal and affectionate, but they also won’t be too bothered if you need to leave them home alone. Because they are so easy-going, this cat breed is unlikely to get anxious if you’re away at work every day. However, consistency is important to any kitty, so read up on how to manage your cat’s separation anxiety if there is a sudden change in how often you are away from home.

Happy indoors. As long as you neuter your cat, it’s unlikely your British Shorthair will feel naturally inclined to wander. They enjoy short bursts of activity followed by long periods of sleep. This makes this cat breed perfect for apartment living as they are quite content staying indoors.

Friendly with other pets. British Shorthair cats will get along with every member of the family—including other fur friends. If properly socialized, this kitty breed will make friends with other felines in the home and you can even introduce them to dogs!

Healthy. They are one of the healthiest breeds around. One condition this particular breed is prone to is hypertrophic cardiomyopathy—a thickening of muscles around the heart. Read up on this condition so you can be prepared if your furry friend starts to show symptoms. However, as long as Mr Whiskers has annual vet check-ups and maintains a healthy diet and exercise routine, he is unlikely to run into other serious health issues.

Cons of a British Shorthair cat

Not always child friendly. Although British Shorthairs are placid by nature, this type of feline may not be ideal for families with small children. They do well in child-free homes or homes with older kids. Why? Small children struggle with knowing how to respect pets, and British Shorthair cats can be short-tempered when they feel their boundaries are pushed.

Weight gain. British Shorthair cats are heavy boned and thick, which means that they require regular exercise and careful feeding to maintain a healthy weight. Stick to a feeding schedule and play daily with your British Shorthair to help them stay in good shape.

Thick fur coats. Because of their plush coats, British Shorthair cats may require a little more daily cat care than other breeds. You’ll need to brush your furry friend regularly. Do this daily in the winter when his or her coat is thicker, and once or twice a week in the summer when it thins out.

Not lap cats. They are devoted and loving, but they are not the type of kitty who will enjoy sleeping on you. If you want a very cuddly fur friend to snooze on your lap, the British Shorthair may not be the right breed for you.

Should you get a British Shorthair?

Owning a cat is a big commitment and not a decision to be made on a whim. Take your time deciding if the British Shorthair cat is the right choice for you. Will they fit in with your lifestyle? Are they a good personality match? Are you able to offer them the care this breed needs?

If you do decide to purchase a British Shorthair, make sure to source your new fur friend from a reputable breeder. Avoid kitten mills or questionable breeders as this could result in a kitty with health issues or defects caused by bad breeding practices.

Whether you have a British Shorthair or another type of cat, there’s no doubt that your feline friend deserves the best. Check out our posts on how to be a stellar fur parent, and how to tell if your cat is happy or unhappy.