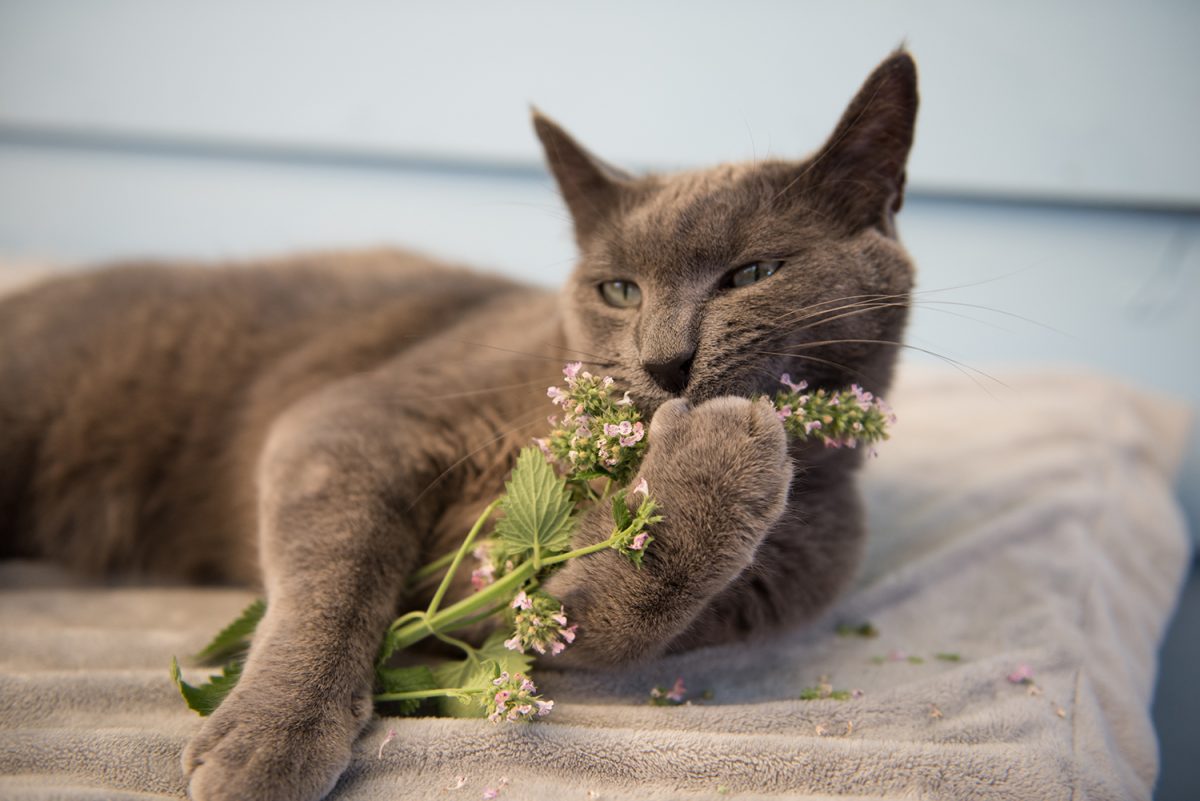 The power of catnip on cats

Catnip is a mysterious plant. A seemingly innocuous green herb in the mint family, it has the power to turn kitties into a bundle of joyful weirdness. Jumping, drooling, rolling around, licking, purring or staring into space – catnip can have a profound temporary effect on our cats. But how does it work and why? Cat in a Flat finds out.

Catnip (or nepeta cataria) is a species of plant in the Lamiaceae order, otherwise known as the mint or sage family. It is a perennial, drought-resistant plant that blooms from spring to autumn and resembles a mint plant in appearance. Like most plants in the mint family, catnip is aromatic and is grown by many people to attract butterflies and to keep cats happy. The plant is also an effective insect repellant. Humans have used catnip therapeutically for years in teas, juices, poultices and infusions for its sedative and relaxing effects.

Do all cats react to catnip?

Catnip affects around two-thirds of cats. Not all kitties will react to the plant, so don’t be concerned if your cat isn’t interested in it. Cats can be genetically predisposed to respond to catnip – it is common for a family of cats to all react or not to the plant. Most kittens will not show interest in catnip until they are two to three months old and older cats respond less frequently to the plant too. As cats absorb the effect of the herb through their noses, it might be that if their sense of smell is undeveloped or starting to fade, that kitties won’t feel the plant’s effects.

What does catnip do to cats?

Catnip contains a substance called nepetalactone, which is released when the leaves and stems of the plant are bruised or crushed. Cats detect nepetalactone in the nose, and it sends a signal to kitties’ brains that causes the euphoric-seeming reaction. No one is 100 per cent sure why nepetalactone has this effect on cats; some scientists posit that it’s because it resembles cat pheromones.

For cats that do feel the effects to catnip, it induces varied reactions including rolling around, licking the herb or its container, zooming and jumping around, stretching, kneading, purring, face and body rubbing or remaining completely docile and still.

As it’s an olfactory response, gradual nose blindness will stop cats being able to detect nepetalactone around 15-30 minutes after the initial exposure. After this period, most cats will stop reacting to catnip until you bring it out another time.

Is it just domestic cats that react to catnip?

No! All kinds of wild felines and big cats react to catnip including leopards, lynxes, bobcats and jaguars. Some lions and tigers also show a response to the plant though not as frequently or as intensely as smaller felines. Lynxes and bobcats have such a strong reaction to catnip that trappers use the plant to lure them. Catnip also affects many breeds of dogs and can be used to keep some puppers calm and relaxed.

Is catnip safe for cats?

Some cat owners worry that catnip might be addictive but rest assured, the effects are brief, harmless and non-addictive. Few tomcats will become aggressive when exposed to the plant. This behaviour is probably triggered by the close relation of the smell of catnip to kitty pheromones. If your cat exhibits undesirable behaviours then take the catnip away, the effects should wear off quickly.

Are there other plants that have the same effect?

Valerian, honeysuckle and silver vine all have a similar effect on cats. If your cat doesn’t respond to catnip, you could try one of these plants as an alternative.

Important: many plants that are entirely safe for humans are poisonous to cats. Check carefully that a plant if safe for cats before exposing your kitty to anything new.

How should I give catnip to my cat?

Many cat owners give catnip as loose leaves. These little bits of plant are perfect for kitties to roll around in and lick. Toys stuffed with catnip are a less messy way of getting your kitty to play with the plant. But the effectiveness can disappear, and your cat might become bored with their new playthings. Catnip also comes in sprays, dental sticks, impregnated into blankets, and dry compact balls for Mr Whiskers to bat around the house. You can also buy catnip-laced snacks as a treat for your favourite furry friend.

Can catnip be useful to cat owners?

Because many cats are so attracted to the plant, it can be a useful tool in training your kitty. Save your sofa by sprinkling some on a scratching post to encourage your cat to use it as their claw-sharpening spot. If catnip has a sedative effect on your kitty, you can use it to keep them calm in their cat carrier. The herb is also a great alternative to food as a reward to instil positive behaviours in cats.

Find out more about feline behaviour including whether your kitty could be vegan, whether to bath your cat, and why our furry friends chatter at birds on the Cat in a Flat blog.

Cat in a Flat offers pet sitting near you for home visits and overnight stays.

Find a Sitter Become a Sitter

Answers to Your Top 7 Questions About Cat Behaviour

Why Does My Cat Lie On Its Back? Reasons Why Your Kitty Sleeps Topsy-Turvy

Why are cats scared of cucumbers and other curiousities

Fill in your details to join the community and book this cat sitter, or log-in .