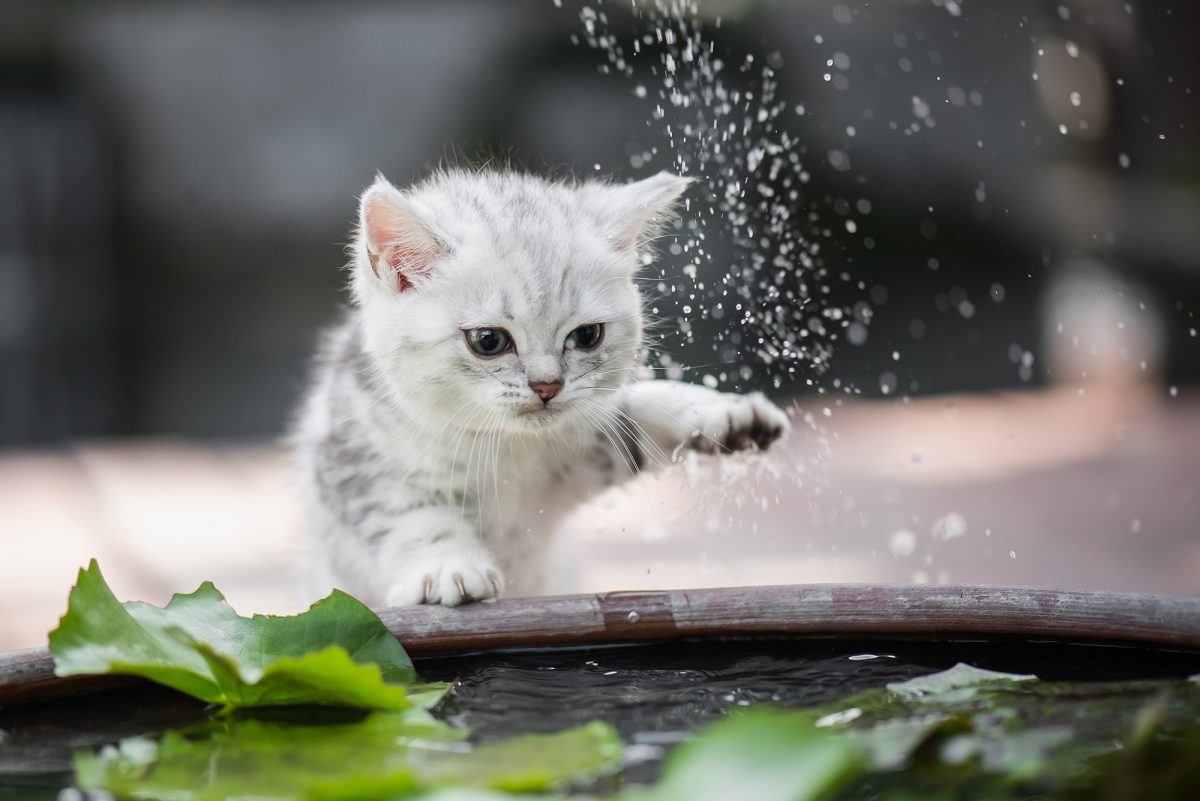 It might seem strange that an animal so fastidious about grooming would have such an aversion to water. Cat owners know, however, that the stereotype rings true: our furry friends will do almost anything to avoid getting wet. Below Cat in a Flat looks at some of the reasons cats might dislike water. We also find out which kitties don’t mind an occasional swim or splash.

Anyone with a passing knowledge of cats knows that they like to keep warm. Whether basking in the sun in summer or huddling up next to a radiator (or human) in winter, kitties love the heat. Domestic cats are descendants of desert creatures and have a higher tolerance for heat than humans. Many water-loving animals such as dogs have an oily, water-resistant coat so that droplets run right off. When a cats’ soft and fluffy fur gets wet, the water sinks in next to the skin, making them feel cold. As the water evaporates, it has the same effect as sweat evaporating off a human body, cooling the skin temperature.

Fluffy fur also absorbs and holds water, making it feel heavier. Because a cat’s fur is absorbent, they will also stay wet for an uncomfortably long time when splashed. For a small animal that likes to keep warm, it’s easy to see why this would make them feel uncomfortable.

As we know, cats are very particular about grooming. Cats can spend up to 50% of their time awake washing themselves. Kitties have very sensitive noses, and much of cat communication comes in the form of smells. It’s important that they don’t smell of anything but themselves. Even something like water, which is odourless to humans, can have an off-putting chemical smell to our furry friends.

Many cat owners will have seen cats drinking from a puddle rather than their clean bowls of water. One of the reasons cats might do this is because of the smell of the chemicals in tap water. That chemical odour is something Mr Whiskers won’t want on his coat, which is why a splash of water often leads to intensive grooming.

Although many cats don’t like water, it’s important to encourage them to stay hydrated especially in warm weather.

Domestic cats are animals of habit and routine; they don’t like change. They also don’t like shocks or surprises. Much as our furry friends react badly to loud noises or a disruption in their environment, they also don’t like the unfamiliar sensation of water.

Most domestic cats are the descendants of desert felines who wouldn’t have come across big bodies of water. Some wild cats from more tropical regions, such as tigers, love to bathe in water to regulate their body temperature. But for the ancestors of the domestic cat, it just wasn’t in their nature. Cats are less domesticated than other pets such as dogs and still retain the water-avoiding instincts of their ancestors. This biological programming, mixed with cats’ dislike of new experiences means that water just isn’t appealing to our furry friends.

So, are all cats afraid of water?

While most cats don’t like water, some don’t mind it, and others fully embrace an occasional swim. Cats have a natural ability to swim and will kitty-paddle across bodies of water if they have to. Hydrotherapy can even help treat cats suffering from a range of ailments.

The Maine Coon is another domestic cat breed to show a liking for water. They might be extremely fluffy, but these cats’ thick fur is more water-resistant than other breeds. The qualities of a Maine Coon’s coat probably come from the cat’s origins in the icy and snow-covered northeast region of the USA. Maine Coons seem to be fascinated by water and enjoy swimming, splashing, playing, and even soaking in it.

Norwegian Forest Cats are often referred to as the cousin the Maine Coon and have similarly water-resistant coats. The breed is also known to enjoy dabbling in water and is especially adept at catching fish from streams or ponds.

Other breeds that show a penchant for H2O include Bengals, Abyssinians, Japanese Bobtails, American Bobtails, Manx and American Shorthair cats. All cats are different, however, so never assume your Bengal or Manx will want to join you in the bath!

Find out more about cat behaviour and what your kitty is saying on the Cat in a Flat blog.